The purpose of the BOSS project was the design and prototype development of an efficient railway communication system. This system was aimed to support the high demands of an audio/video surveillance system in a rolling train from a control center on the wayside, and also to address related issues, such as predictive maintenance. The system is based on WiMAX/HSUPA (outdoors, towards the control center) and WiFi (indoors) networks. 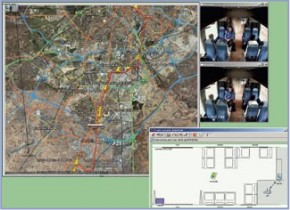 Screenshot of the BOSS simulation, with transmitted video and mobility displays

The functional architecture had been developed into a full communication architecture as an OMNeT++ simulation model. The model was enriched through the project lifetime by the modules and algorithms developed within the project's technical packages on radio communications, signalling, adaptation to impairments, efficient multimedia compression, and abnormal events detection.

"The OMNeT++ simulator was a key element to ensure firstly validation of the system before prototyping, secondly establishment of initial working settings for the demonstration phase, and thirdly measurement and assessment of techniques that will not be realistically implantable in the BOSS demonstrator," they write.

Read the full article in the November 2008 issue of Celtic News (pdf).

A video demonstration of the BOSS project (unfortunately without the simulation) can be viewed here.